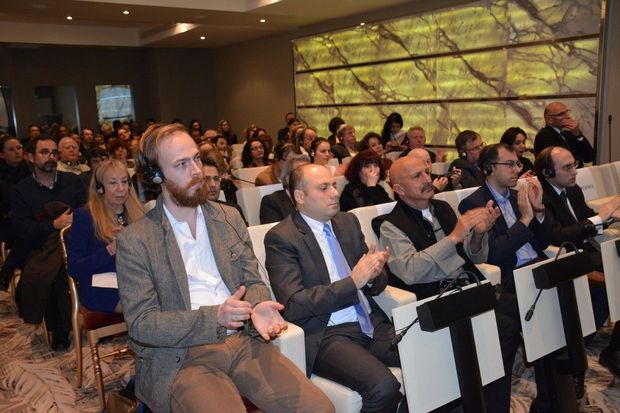 "Khojaly, a 25-year silence: Truth of genocide" conference-debate was held in Paris Cultural Center under organizational support of the Azerbaijani Embassy in France and the Association of Friends of Azerbaijan.

Oxu.Az reports citing AzerTag that the event was moderated by the chairman of Association of Friends of Azerbaijan, the MP of French National Assembly Jean-Francois Mancel. MP Rovshan Rzayev, geopolitics expert of conflict zones Didier Chaudet and historian Maxim Quen, as as well as witnesses of the Khojaly events - Afsana Alakbarova, the woman who had lost both parents in Khojaly tragedy and legendary photojournalist Reza Deghati shared their memories.

The Conference started with the "Khojaly Genocide" documentary film prepared by the Heydar Aliyev Foundation.

MP Rovshan Rzayev gave detailed information about the Nagorno Karabakh conflict, Khojaly genocide, spoke about ethnic cleansing policy against our people. The MP said that the international organizations have issued the relevant resolutions and decisions on Nagorno Karabakh, though they still have not been implemented. He said that April events have shown the power of Azerbaijani army. However, our country prefers peaceful solution of the conflict.

He noted that "Armenian-Azerbaijani peace platform" was established on December 6, 2016 in Baku. Its purpose to continue the dialogue of the civil societies and to contribute to the peacefull settlement of the Nagorno Karabakh conflict in the famework of OSCE Minsk Group. MP has called French society to support the platform.

Photojournalist Reza Deghati who was in the city of Aghdam when Khojaly tragedy took place, has also shared his memories at the event. He told about photos published during the conference, he was not able to broadcast in French media despite all his efforts.

Azerbaijani Ambassador to France Elchin Amirbeyov expressed gratitude to the conference participants for their contribution in promoting the truth about the Khojaly genocide. He touched upon events that occurred in April, 2016.

In the end, the speakers answered the questions of the participants.