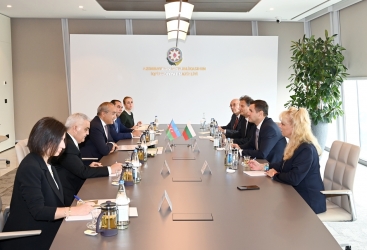 Minister Mikayil Jabbarov hailed the development of relations between the two countries, the expansion of relations in various fields of the economy, especially in the field of energy. Emphasizing the favorable business environment in Azerbaijan and the economic potential of the territories liberated from occupation, Jabbarov invited Bulgarian companies to benefit from the country’s business environment.

Nikola Stoyanov noted that his country is interested in the development of bilateral relations. He underlined that the expansion of economic relations would contribute to the strengthening of partnership in other areas.

The sides also exchanged views on prospects of economic cooperation, defining the investment opportunities, relations in the field of transport and transit, and gas supply to Bulgaria.