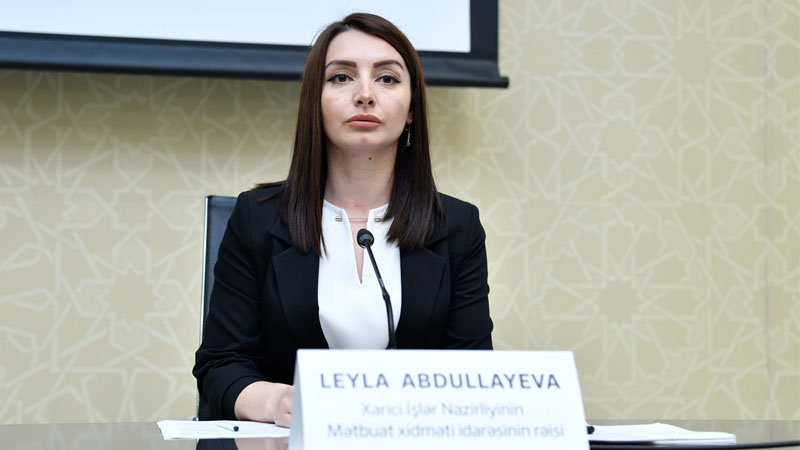 Leyla Abdullayeva, head of the press service of the Azerbaijani Foreign Ministry, responded to a media inquiry regarding the visit of a four-member delegation of the far-right Alternative (AfD) party for Germany to the occupied territories of Azerbaijan.

Leyla Abdullayeva said that on October 18, 2020, a four-member delegation of the radical right-wing Alternative (AfD) party for Germany, consisting of representatives of factions in the Landtag of the Bundestag and the federal state of Brandenburg, Steffen Kotré, Stefan Keuter, Andreas Galau, and Andreas Kalbits visited Azerbaijan’s occupied territories.

"We would like to note that these MPs, who have a very negative image in Germany, are the members of a group in the AfD party that propagandized for Armenia. Andreas Kalbits was expelled from the party for his neo-Nazi past on the grounds that he was a member of the neo-Nazi Republican Party at a meeting of the board of the AfD party on May 15, 2020. Also,

Bundestag member Stefan Keuter is also known for his enthusiastic use of Nazi and anti-Semitic slogans.

It should be noted that the responses to the letters of protest sent to the Presidents of the Bundestag and the Landtag of Brandenburg in connection with the illegal visit of the four politicians in May last year, stressed that the visit was not agreed with the relevant bodies, did not take place with the permission of any committee. At the same time, the AfD faction of the Bundestag has a common position on the settlement of conflicts on the basis of international law norms and principles.

The Azerbaijani embassy in Germany will send a note of protest to the German Federal Foreign Office and to the Bundestag and Brandenburg Landtags in connection with the illegal visit.

This fact once again shows that Armenia's historically existing cooperation with people with extremist and neo-Nazi views continues today.

Therefore, the cooperation of Armenia with the radical right-wing, negative AfD party, which supports fascism in the person of Garegin Njde, once again clearly demonstrates that the country pursues a policy of heroizing fascism at the state level and uses these attempts to promote the illegal regime in Azerbaijan.", Abdullayeva added.