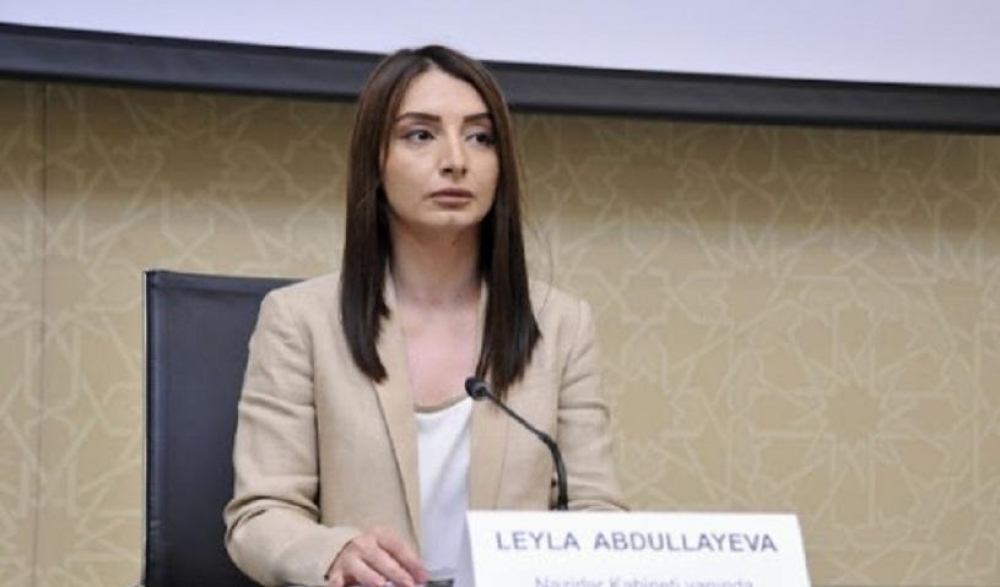 Azerbaijan has been subjected to Armenia's aggression and occupation for 30 years, whereas Iran hasn't expressed its attitude towards the forcible change of borders then, Head of the Press Service of the Azerbaijani Foreign Ministry Leyla Abdullayeva told local media regarding the statements of high-ranking civilian and military officials of Iran, News.az reports.

"Armenia has occupied twenty percent of the territory of Azerbaijan, including 132 kilometers of the border with Iran, for all these years. Therefore, the address of Iran's statements, as "Border changes in the region is a 'red line for us", is not clear. As is known, the Moscow and Brussels formats of meetings between the Azerbaijani and Armenian leaders continue. As part of these negotiations, the State Commission on the delimitation of the state border has been established by mutual agreement of the countries. We believe that the issue of Azerbaijan-Armenia relations should be resolved without outside interference," she said.

Abdullayeva also commented on the issue related to the Iranian border authorities's statement on locating and arresting a terrorist group near the Khudafarin border district on the border with Azerbaijan.

"The Azerbaijan-Iran state border is known as the border of friendship and cooperation. There is an exemplary experience of mutually beneficial collaboration between Azerbaijani and Iranian border guards. Border violations and smuggling cases are regulated through direct contacts between commanders on the ground. Today's statement by the Iranian border authorities has nothing to do with the Azerbaijan-Iran state border," the head of the department emphasized.

To the reporters's question regarding the perception of the Zangazur corridor by Iranian officials as the route "cutting" the Iran-Armenia border, Abdullayeva recalled that Victorious Supreme Commander of the Armed Forces Azerbaijan Ilham Aliyev congratulated the Azerbaijani and Iranian peoples on the liberation of the Azerbaijan-Iran border from occupation.

"Azerbaijan considers its borders with Iran as an opportunity for further development of trade and interaction. The Armenian occupation has disrupted not only the railway communication with Azerbaijan's Nakhchivan Autonomous Republic, but also with Iran. The Interstate Commission keeps holding discussions on opening and restoring regional communication in accordance with the trilateral statement of November 10, 2020," she stated.

Furthermore, Azerbaijan and Iran signed an agreement on establishing infrastructure to link the East Zangazur Economic Region with the Nakhchivan Autonomous Republic through Iran. Following the agreement reached on September 22, 2022, officials from both countries attended the groundbreaking ceremony of a road bridge in Zangilan. Claiming the Zangazur corridor as 'cutting' the border between Iran and Armenia is far from reality. On the contrary, the Zangazur corridor is a crucial project for further enhancement of ties between our countries and promises new prospects for regional cooperation," the foreign ministry spokeswoman said.