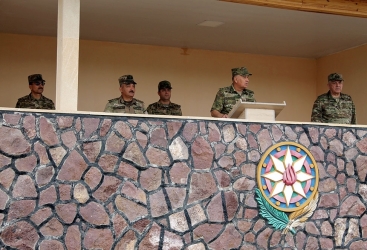 First Deputy Minister of Defense of the Republic of Azerbaijan - Chief of the General Staff of the Azerbaijan Army, Colonel General Karim Valiyev has visited the Land Forces, the Ministry of Defense told News.Az.

The Chief of the General Staff held an official meeting with the Land Forces' command staff.

The meeting analyzed the work done in the Land Forces. The tasks assigned to the Azerbaijan Army by President of the Republic of Azerbaijan, Supreme Commander-in-Chief of the Armed Forces Ilham Aliyev were delivered to the meeting participants.

The First Deputy Minister of Defense delivered the instructions of the Minister of Defense to the relevant officials regarding the further increase of combat readiness and the professionalism of military personnel, the adaptation of the conducted exercises to the real combat conditions and the use of technological innovations in order to effectively apply newly adopted weapons and combat equipment.

After the meeting, the Chief of the General Staff attended the Combat Control Center (CDC). He was reported that the necessary infrastructure was created for the organization of command management in interoperability with other types of troops, taking into consideration the methods of conducting the modern battle.

The Chief of the General Staff was reported that the exercises held to improve servicemen’s tactical-special training are conducted with the consideration of the methods of conducting the modern battle.

It was emphasized that the involvement of young officers in commando courses as part of the measures taken to bring the Azerbaijan Army into line with the model of the Turkish Armed Forces will have a positive impact on increasing the level of professionalism of servicemen.

Then, training episodes on fulfilling the task of conducting combat in human settlements and clearing settlements from an imaginary enemy were observed.

Delivering a speech to young officers, the Chief of the General Staff gave them recommendations on mastering military sciences, developing as professional and disciplined commanders by improving their physical fitness, and becoming an example for subordinate military personnel in the future, as well as wished them success in their further military service.

In the end, Colonel General Karim Valiyev inquired about the concerns of the servicemen and had lunch with them.