Rosbalt: Public against the Nzhdeh cult in Levitan's homeland 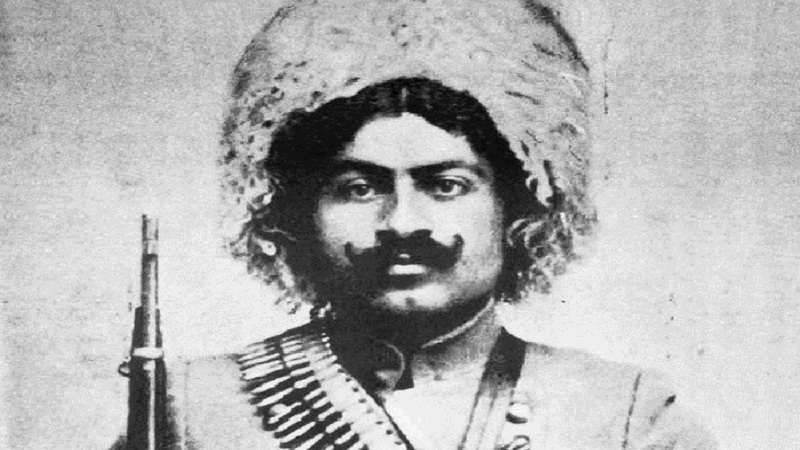 On the eve of the Victory Parade in the Great Patriotic War, the "Stopfashism" civic initiative approached the Vladimir City Hall with a proposal to clean the cemetery of the Vladimir Central from the empty grave of Garegin Nzhdeh (Ter-Arutyunyan), who collaborated with the Nazis.

The initiative was put forward as a result of an online conference "The memory of the war and the war of memory in modern Russia" held on June 19 in the news agency "Rosbalt" with the participation of the first deputy chairman of the State Duma Committee on Foreign Affairs Dmitry Novikov, a member of the Council on Foreign and Defense Policy, Major General of the FSB in the reserve Alexander Mikhailov, as well as members of the "Stopfashism" civic initiative - Galli Monastyreva, Chair of the Commission for the Development of Inter-Ethnic Relations of the Council for Nationalities under the Government of Moscow, Dimitriy Sagal, Chair of the Vladimir Regional Branch of the Izborsk Club, and Vladimir Tskhvediani, Ukrainian journalist and political analyst. 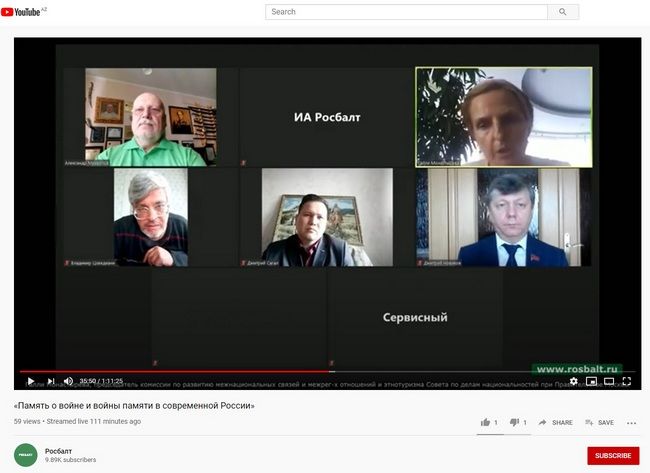 During the online conference, practical steps were considered to stop attempts to glorify fascism and Nazi collaborators in Russia. It was recommended to use for this purpose the experience of public involvement, which took place when dismantling the memorial plaque in honor of General Mannerheim in St. Petersburg in 2016 and the memorial plaque in honor of Garegin Nzhdeh (Ter-Arutyunyan) in Armavir in 2019. 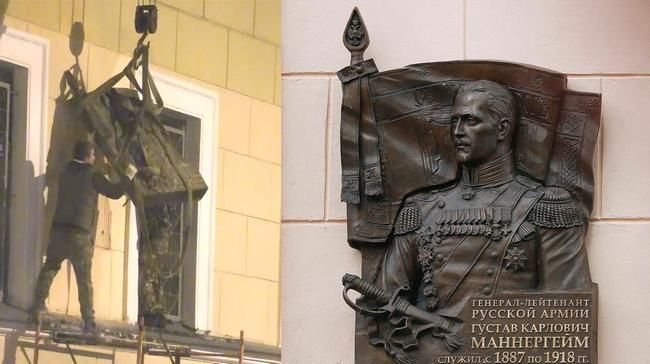 The conference participants supported the statements voiced in President Vladimir Putin's article "75 Years of the Great Victory: A shared responsibility before history and the future", which stated: "Today our position remains unchanged: there can be no justification for the criminal acts of Nazi collaborators, there is no period of limitations for them. That is why it is bewildering when in a number of countries those who tarnished themselves with cooperation with the Nazis are suddenly equated with World War II veterans ... And the glorification of Nazi accomplices can only be seen as a betrayal of the memory of our fathers and grandfathers. Betrayal of those ideals that united peoples in the fight against Nazism."

Conference participants noted that while the Russian Constitution proposes an amendment to ensure the protection of historical truth, there are attempts to transfer the process of perpetuating the memory of the Nazis and the glorification of their accomplices to the territory of Russia itself.

State Duma deputy Dmitry Novikov urged to take an example from public initiatives to stop attempts to glorify fascism. He stressed the need for new legislation that prohibits falsification of the history of the Great Patriotic War and attempts to whitewash the henchmen of fascism. It is necessary to regulate this situation more tightly in the conditions of the large-scale campaign on falsification of the history of World War II.

In this regard, the appeal, signed by members of the "Stopfashism," notes that for several years, an empty grave of Garegin Nzhdeh in the cemetery of the Vladimir Central has been turned into a place of organization of so-called "events of memory", in which representatives of the Armenian diaspora of the city and Russia participate.

How did Nzhdeh get to Vladimir?

Being one of the organizers of the Armenian Legion of Wehrmacht, Nzhdeh was captured by Soviet intelligence at the end of the Great Patriotic War in Bulgaria. During interrogations, he acknowledged his cooperation with SS functionaries. The investigation revealed that Nzhdeh recruited hundreds of saboteurs from among prisoners of war and Armenian emigrant youth to the Armenian Legion participated in war crimes on the territory of the USSR, particularly in punitive raids against the Jewish population of the Crimea occupied by Germans.

Speaking about it at the conference in the news agency "Rosbalt", the Ukrainian journalist and political scientist Vladimir Tskhvediani particularly noted that the fascist beliefs of Nzhdeh in the 1930s were not denied even by the American establishment. The journalist reminded that for his beliefs and sympathies with the fascists Nzhdeh was expelled from the USA in 1936 and moved to Germany, to the center of Nazi ideology - Munich.

Also on May 4, 1945, U.S. Congressman Frank Hook presented a report to the U.S. Congress on the sympathies of the Dashnak party (which belonged to both Nzhdeh and Dro) to Hitler and their support for the Holocaust. 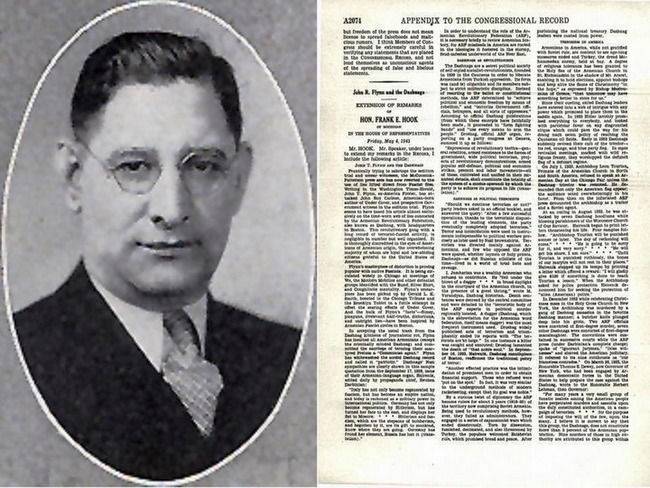 The published report cited Dashnak propaganda that recognized fascism as a "gift to humanity", "a system that gave new life to Germany and Italy", and the Holocaust as a "surgical intervention" designed to "eradicate the poisonous element".

Convicted by the Soviet court for war crimes Nzhdeh served a long time in Vladimir Central, where he died in 1955. In the 1980s, a group of Armenian nationalists secretly transported the contents of the Vladimir grave to Soviet Armenia, and after the collapse of the Soviet Union, the remains of Nzhdeh were dismembered and buried in various places in the country. As the participants of the online conference noted, today the cult of Nzhdeh has been established in Armenia on the state level, and the official ideology assesses the period of its cooperation with the Nazis as a logical continuation of its "struggle for Armenia's independence. A monument to Nzhdeh has been erected in the center of Yerevan, opened with the participation of the country's leadership.

It is noted that the attitude towards Nzhdeh has not changed in Russia. Thus, the report of the Ministry of Foreign Affairs of the Russian Federation and the works published by the Ministry of Defense and FSB, show the fascist essence of the ideology of cegacronism, cooperation of Nzhdeh with the Third Reich and his crimes on the territory of the USSR. As part of international efforts to counter the tendency to falsify the history of the war and rehabilitate fascism in Russia, concern has repeatedly been expressed about the fact of its heroization in allied Armenia. 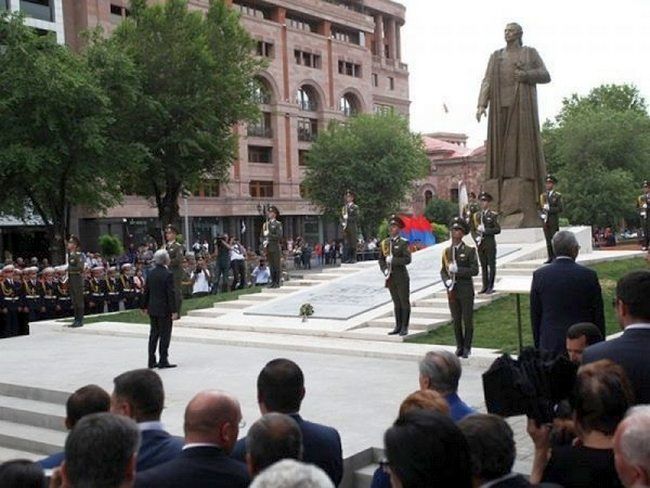 Speaking at the conference at Rosbalt news agency, Chairman of the Vladimir Regional Branch of the Izborsk Club Dimitry Sagal reminded that the attention of the Russian public was once again drawn to the odious figure of the collaborator during the scandal in 2019 when it turned out that the Nzhdeh memorial plate was installed in the courtyard of the Armenian Church in Armavir.

This led to the demonstration of the local Communist MP Vinogradov who greased the Nzhdeh tablet. As a result of the protests of the Armavir public, the tablet was demolished. "When we came to the memorial plaque with the Cossacks, it turned out that there was an urgent repair," Sagal told the participants of the video conference.

The appeal to the Mayor's Office of Vladimir notes that the Armavir tablet is not an isolated case of the glorification of Nzhdeh in Russia. "Thus, around an empty grave of Nzhdeh in Vladimir several times a year, the Russian Armenian diaspora holds so-called 'events of memory'. In this case, the commemoration is held in accordance with the profane rite, which Nzhdeh himself adhered to. 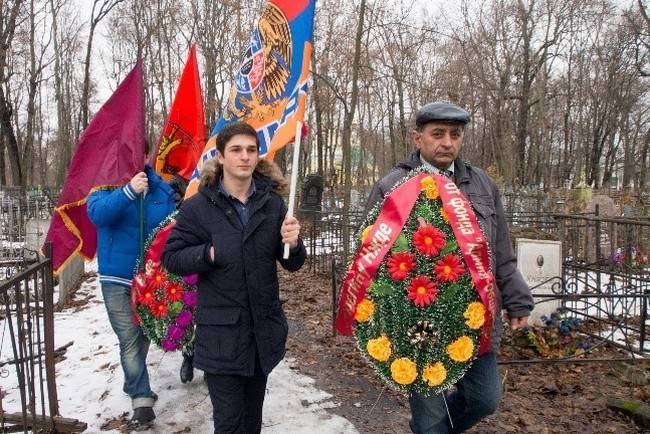 Moreover, visits to Nzhdeh tomb are included in regular tours of Vladimir organized for tourists from Armenia and the Armenian Diaspora of Russia. It has also been established by the members of the "Stopfashism" that symbols heroizing Nzhdeh and the ideas of his "Tsegakron" pro-fascist ideology preaching the principles of racial superiority are widely disseminated among the Armenian youth of Russia".

"In the year when the country celebrates the 75th anniversary of the great Victory, it is unacceptable to turn a blind eye to the fact that part of the Vladimir land, the small homeland of the Victory's voice - Levitan, has been turned into a place of worship of a fascist abettor," the address says. "Taking into account the desacralized status of an empty grave, such position of the city authorities is not a manifestation of tolerance, but disrespect for the memory of thousands of people killed and tortured as a result of the cooperation of the Legion of Nzhdeh with the Hitlerites, as well as the memory of the millions who died for the common victory - both Russians and Armenians," the address stresses. In this regard, the issue of demolishing the empty grave of Nzhdeh was raised before the City Hall of Vladimir as a civil initiative.

The struggle for the national identity of the Russians

"Russia has a principled position and is making serious efforts at the international level to prevent the glorification of fascism," commented on the purpose of the appeal one of its signatories, Dmitry Sagal. "We see the same trends in the Baltics, Ukraine and Armenia. And now they are trying to impose the falsifying narrative of the Great Patriotic War inside Russia as well - through the glorification of Mannerheim, through the remembrance of Nzhdeh".

"Today the object of this propaganda is Armenian youth in Russia, and tomorrow it will be other national minorities, and then the whole Russian society. After all, this struggle is not only for the abstract historical truth but for the national self of Russians. Who will our offspring be perceived as heroes - Zhukov or Mannerheim, Baghramyan or Nzhdeh? The future greatness of Russia depends on it. I believe that there can be no trifles in this struggle. That's why the same principle should be shown to the empty tomb of Nzhdeh in Vladimir as in the case with the installation of the commemorative plate for Mannerheim in St. Petersburg. This will be the practical implementation of the amendment on the preservation of historical memory, for which we will vote on July 1," stated Sagal.