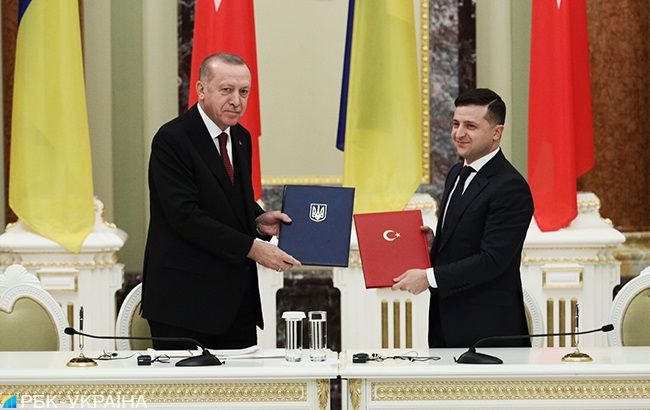 President Recep Tayyip Erdoğan and his Ukrainian counterpart Volodymyr Zelenskyy both hailed the deal that will reduce barriers in trade between the two Black Sea neighbors and help them reach a bilateral trade volume of $10 billion, a goal set by the two leaders.

The FTA and several other deals came on the sidelines of Erdoğan’s visit to Kyiv that comes amid a standoff between Ukraine and Russia. Moscow has massed troops near Ukraine’s borders in recent weeks but denies planning to attack its neighbor.

“Signing of the free trade agreement between Ukraine and Turkiye is a historic event,” Zelenskyy said in a joint press conference alongside Erdoğan after more than four hours of talks.

Erdoğan said they discussed steps to be taken to lift bilateral trade to $10 billion and stressed the FTA would have a positive impact in this regard.

He also highlighted that “today’s meetings and the agreements are a symbol of our will to move our strategic partnership even further.”

Eight agreements, including the free trade pact, were signed during Thursday’s visit — which coincides with the 30th anniversary of the establishment of diplomatic ties between Turkiye and Ukraine.

“This means that our goal of $10 billion (trade volume) is possible. The free trade agreement will allow us to achieve this goal faster than we expected,” Zelenskyy said.

Negotiations on the free trade deal have dragged on for about a decade due to disagreements over grains and metals, which accounted for about 70% of Ukrainian sales to Turkiye.

The two countries also have high exchanges particularly in steel, yachts, the shipping industry, furniture, automotive supplies, fruits and vegetables, as well as the defense industry.