Why should Armenia hand over mine maps to Azerbaijan? (OPINION) 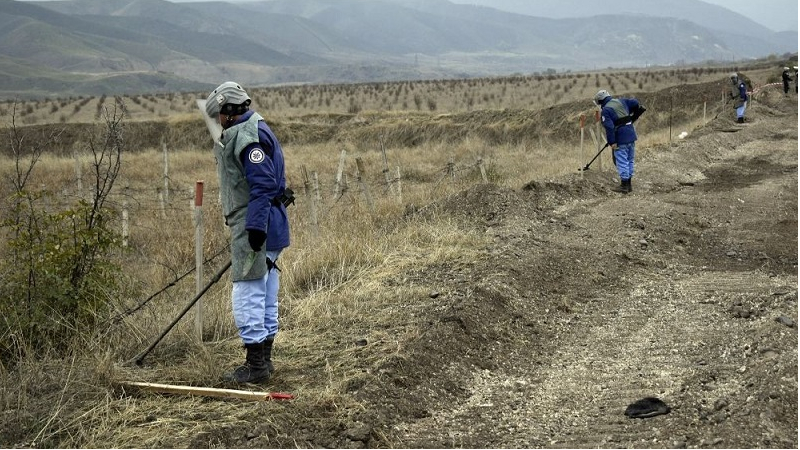 Six months have passed since the first fire of the Second Karabakh War that started in the early morning of September 27, 2020. The war ended the three-decade old status-quo in the conflict between Armenia and Azerbaijan over the Karabakh region and surrounding districts, recognised internationally as belonging to the latter but which fell under Armenian control after the First Karabakh War of the early 1990s.

Having defeated Armenia on the military field, Azerbaijan succeeded in re-establishing its control over the occupied territories. The end of occupation, which Azerbaijan described as a resolution to the conflict, provides a unique opportunity to find common ground and reach agreements on the contested issues between the sides.

This new situation was thus welcomed by most regional and international actors as being conducive to building durable peace and prosperous co-operation platforms in the region. There are, however, numerous challenges to this route and the two countries should seize every opportunity that might help overcome them.

The facts that the war did not end with a maximalist victory or total defeat of one side against the other and that the governments of Armenia and Azerbaijan recognise the benefits of co-operation within regional transportation and other projects, generate a good basis to open a new chapter in the relations between the two countries.

At this stage in relations, Armenia’s handover of the mine maps of the formerly occupied territories to Azerbaijan would serve as a substantial impetus to the peace process and encourage the two sides to compromise in other conflictual issues. This is, however, not only a recipe for easing tensions between the sides but also an order of international humanitarian law that prohibits the indiscriminate use of landmines.

The Azerbaijani authorities state that the formerly occupied region has been considerably mined, often targeting civilian infrastructure, lampposts, canals, road junctions, courtyard entrances, cemeteries, riverbanks, and rural and urban paths. “Sometimes more than 10 mines per square meter are found in the mined areas”, according to Azerbaijan Mine Action Agency (ANAMA). Up to 20 Azerbaijani citizens, including civilians, have been killed and more than 70 people have been wounded by mine explosions in the liberated territories since the end of the latest war.

Yerevan’s refusal to abide by the international law and co-operate on this sensitive issue in spite of a mounting number of the victims outrages the Azerbaijani side, further strains the regional situation and averts the emergence of a co-operative environment between the two countries.

“Landmines massively implanted by Armenia in liberated lands of Azerbaijan indiscriminately are killing, maiming civilians and harming the economy and the environment. Armenia refuses to give accurate maps of contaminated areas. The irresponsible behavior of Armenia must be seriously condemned,” Hikmet Hajiyev, Azerbaijani presidential aide, wrote on his official Twitter account on March 17. In another statement in late March, he declared that the liberated territories of Karabakh are among the most mined territories in the world, calling this “mine terror” by Armenia against Azerbaijan.

“In one of the latest mine explosions that occurred on March 16 in Aghdam region, six civilians suffered, two of them killed,” Azerbaijani Foreign Minister Jeyhun Bayramov said at a joint news conference with his Slovak counterpart Ivan Korcok in Baku on March 17, characterising this as “the continuation of Armenia’s aggression against Azerbaijan” and calling upon the international community to pressure Armenia to hand over the mine maps. According to the information provided by ANAMA, during demining operations since September 27, more than 16,586 square meters of territory (1.66 hectares) have been checked, and 9,584 anti-personnel and anti-tank mines, and 7,081 unexploded munitions have been found and neutralised.

According to some estimations, the process of demining the entire liberated territories could take more than twenty years and is further complicated by the mountainous nature of the region. The international support that Azerbaijan has received helps to accelerate the process but does not solve the problem in the necessary timeframe.

It is therefore of the utmost importance for the Armenian authorities to hand over the maps of the mined sites, stop loading the regional situation with more challenges and provocations, and grasp a unique historical chance to turn the page of enmity between Azerbaijanis and Armenians. Armenia has no reasonable alternative but to co-operate in the demining of the Karabakh region because, amongst other things, every explosion that kills civilians is also a shot against the peace initiatives – certainly, if peace is something Armenia strives for in relations with Azerbaijan.

Vasif Huseynov is a Senior Advisor at the Baku-based Center of Analysis of International Relations (AIR Center).