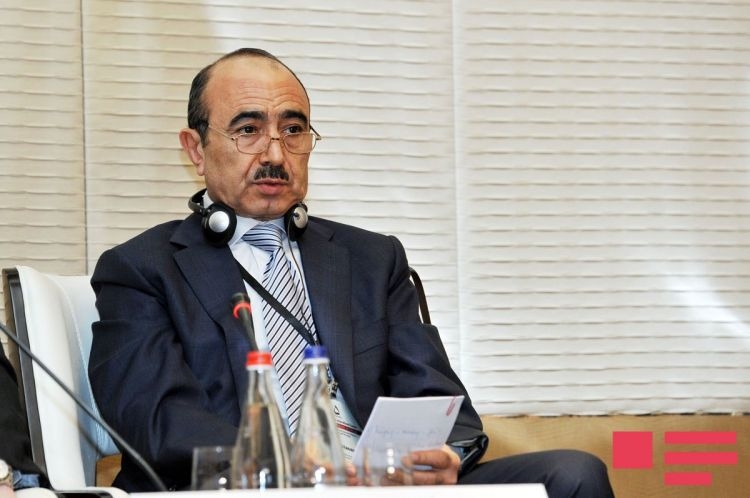 A panel session titled “What alliances will be built in the forging of modern international relations?” was held within the Fifth Baku Global Forum on Thursday.

Addressing the panel, former Bulgarian President Petar Stoyanov said that there is such an impression that the United States has become the only superpower after the collapse of the USSR.

Referring to the future of NATO, Stoyanov touched upon US President Donald Trump’s statements on the need for NATO countries to increase their defense spending.

EU countries, according to the ex-president, believe in the future of NATO and see no alternative to the alliance.

Former president of Ecuador Rosalia Arteaga said that today the US is pursuing a policy of protectionism which, according to him, caused the Great Depression of the 1930s.

Arteaga said he believes the US will strengthen its economic ties with the United Kingdom and form an alliance with it.

He stressed the importance of promoting peace, the need to introduce this topic into school textbooks.

Former Croatian president Ivo Josipović stressed his concern about the future of peace.

"People are very worried about tomorrow. The West could not predict what would be the effect of interference in the affairs of different countries. A few years ago, when I was the president, they said at a meeting with high-ranking US officials that the Syrian issue had already been resolved. However, this problem is still not solved. I am afraid that the great powers will allow the Syrian situation to repeat itself in other countries and regions, including the Balkans,” he added.

Former French finance minister Edmond Alphandéry said that he has not lost faith in the European Union.

"The most important thing is to make sure we don’t make any mistake as to the European Union, whose 60th anniversary we’re going to mark in the coming days. We must strengthen our defense capabilities within NATO. It is necessary to assure the Europeans that the European Union is a very successful union," he added.

Nicholas Logothetis, co-founder and chairman of the Board of Concordia, said he has very good impressions of Azerbaijan and that he will come to Azerbaijan with his wife on vacation. He said no one could predict what steps the new US government would take.

"There are two forces in the White House today. One of them is the traditional Republicans, and the second is the force led by Steve Benen. Steve Benen expresses very dangerous thoughts. He talks about the reconstruction of the state administration and strongly believes in populist politics. He has a very strong influence on Donald Trump. I believe that the traditional Republicans will win. The world will witness that November 9, 2017 will be very different from November 9, 2016,” he noted.

Addressing the event, Azerbaijani President's Aide for Public and Political Affairs Ali Hasanov said that new approaches are emerging in connection with the role and position of influential political organizations including the UN in the system of international relations.

According to him, it’s a regrettable fact that most of UN resolutions and decisions are not imperative and that it takes a double-standard approach to punishing aggressive countries responsible for the instigation of conflicts around the world.

"Today, it is clear to everyone that, under the influence of some Western countries, the UN fails to show the same attitude towards the implementation of its resolutions and decisions, which causes serious damage to its reputation,” the top official said, noting that a number of countries in the South Caucasus, Eastern Europe, some parts of Africa, and the Far East are losing their confidence in the UN.

He stressed that Azerbaijan, which never interferes in domestic affairs of other countries and respects international law, supports UN resolutions that aim to resolve conflicts in various parts of the world and their speedy implementation.

Hasanov criticized the UN, saying that it was quick to encourage Iraq’s immediate punishment while having failed so far to demonstrate a principal stance to encourage the fulfillment of its resolutions concerning the Armenia-Azerbaijan Nagorno-Karabakh conflict

“While the UN resolution regarding Libya was fulfilled straightaway, the four resolutions the UN passed concerning Armenia have not been implemented for more than two decades. As a result, the necessity has arisen for the UN to carry out new reforms, to restructure itself, and to make serious changes in its strategy in order to be able to operate as an independent organization far from double standards,” he added.

The top official stressed that the idea of carrying out reforms in the UN became more pressing with the adoption of the Millennium Declaration in the early 21st century.

He said that Azerbaijan supports the idea of carrying out reforms in the UN to eliminate conflicts worldwide and ensure peace and stability.

Hasanov went on to note that various approaches have been taken by the international community as to what unions to establish in regulating modern international relations.

The top official pointed out that the Non-Aligned Movement (NAM), which Azerbaijan became a member of in 2011, wants a new architecture of world order to be based on equal-right partnership.

“We think that saving the world lies in finding a balance between international law and power,” he added.