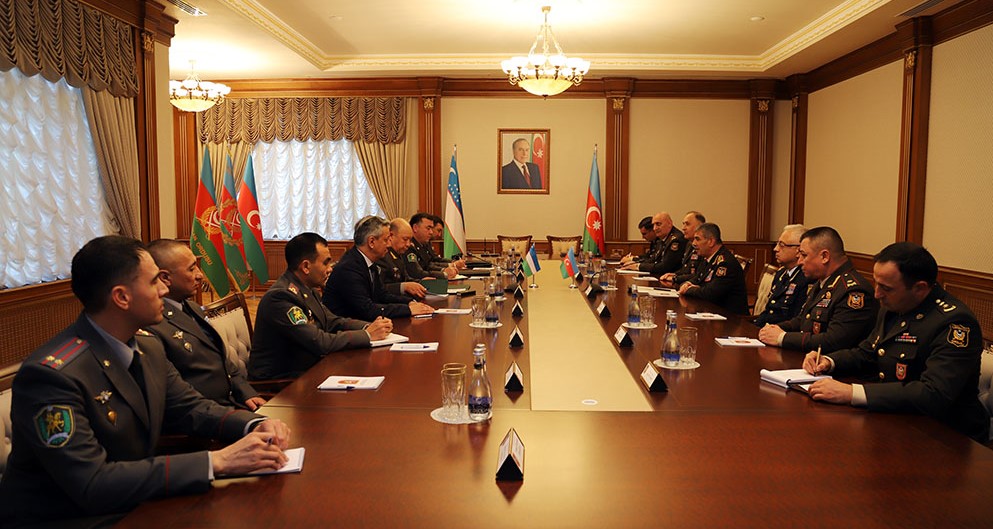 On October 19, a delegation led by the Minister of Defense of the Republic of Uzbekistan, Lieutenant General Bakhodir Kurbanov, arrived in Azerbaijan, News.az reports citing Azerbaijan's Defence Ministry.

The delegation first visited the graves of the National Leader of the Azerbaijani people Heydar Aliyev and prominent ophthalmologist, academician Zarifa Aliyeva in the Alley of Honor and laid wreaths and flowers. The guests also visited the Alley of Shehids, laid wreaths and flowers at the graves of Shehids, who sacrificed their lives for the independence and territorial integrity of Azerbaijan.

Then a solemn welcoming ceremony was held at the Ministry of Defense. The Defense Ministers of both countries passed along the guard of honor and the national anthems were performed. Lieutenant General B. Kurbanov signed the “Book of Honor” in accordance with the protocol.

Welcoming the guests, Colonel General Zakir Hasanov expressed satisfaction to see them in Azerbaijan and noted that bilateral military cooperation between the two countries is based on friendly and fraternal relations.

The Defense Minister informed his Uzbek counterpart about the operational situation that has arisen after the decisive measures taken by the Azerbaijan Army against the latest provocations committed by the Armenian armed formations, as well as about the work carried out in the field of army development.

Emphasizing satisfaction with the visit to Azerbaijan, the Minister of Defense of Uzbekistan expressed his gratitude for the warm reception and conveyed his congratulations on the upcoming Victory Day. He noticed that cooperation between Azerbaijan and Uzbekistan in the defense sphere serves to further strengthen the armies.

Prospects for the development of cooperation between Azerbaijan and Uzbekistan in the military, military-technical, military-educational and other spheres, regional security, as well as other issues of mutual interest were discussed at the meeting.

In the end, the delegation arrived at the Central Command Post and got acquainted with the technical capabilities of the command management and the work carried out in general.