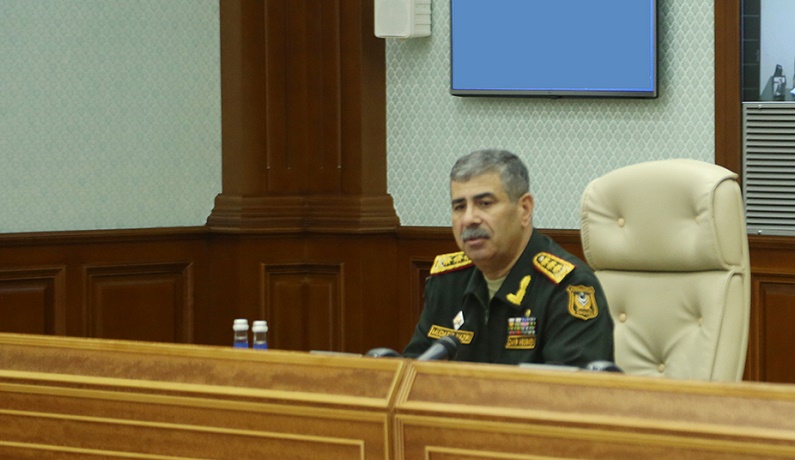 On October 2, the Minister of Defense, Colonel General Zakir Hasanov held an official meeting at the Central Command Post. Deputies of Minister of Defense, Commanders of types of troops, Chiefs of Main Departments, Departments, and Services of the Ministry attended the meeting. Commanders of the Army Corps and formations stationed in the liberated territories and other officers were also involved in the meeting held via video conferencing.

Bringing to the attention of the meeting participants the tasks assigned to the Azerbaijan Army by the President of the Republic of Azerbaijan, Supreme Commander-in-Chief of the Armed Forces, Mr. Ilham Aliyev, the Minister of Defense instructed to pay special attention to the training of troops in the Azerbaijan Army.

The meeting analyzed the situation on the state border and in the territory of Azerbaijan, where the Russian peacekeeping contingent is temporally deployed.

In order to maintain a high level of combat readiness and vigilance of personnel, the Defense Minister gave instructions to pay special attention to the practical training of units and control points, the specification of combat plans, as well as logistics.

The importance of informing the military personnel about the safety rules and strict control over their compliance was emphasized.

Colonel General Zakir Hasanov gave relevant instructions on organizing the military service in the units, cleaning the territories from mines and unexploded ordnance, creating military infrastructure, laying mountain roads and keeping them in constant working condition, completing the preparatory work for the winter season, in particular, timely delivery of the necessary resources to the units deployed in the mountainous areas in the liberated territories.

The Minister gave instructions to the relevant persons to carry out the process of distributing the conscripts in the relevant units by means of special computer software in accordance with the relevant order of the Supreme Commander-in-Chief as well as discharge the servicemen from active military service to reserve.