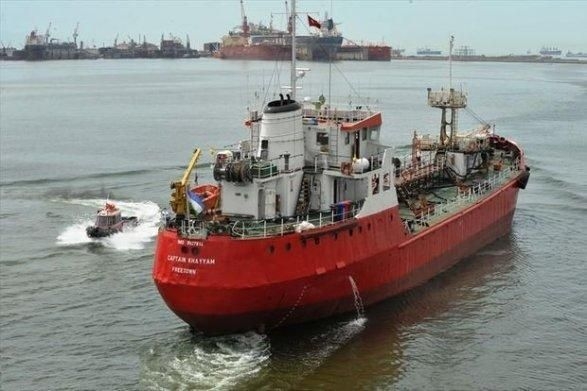 One of the three Azerbaijanis detained in Libya on February 13, 2016, 48-year old Elshad Huseynov died.

His wife Sakina Huseynova told APA that he died of heart failure on March 5, 2017.

His body was taken to Turkey, then to Azerbaijan thanks to joint efforts of Azerbaijani Ministry of Foreign Affairs and Turkey’s “Sayğı Dənizçilik və Elektrik San.” company in which Azerbaijanis are working.

Huseynova said she had telephone conversation with her husband a few times during his detention. Phone calls were organized by employee of the Turkish company Murad Karen.

The crew of the vessel Captain Khayyam included 3 nationals of Azerbaijan, one of Turkey and 4 of Ukraine.

They were detained in Libya on suspicion of an attempt to smuggle gasoline. 41-year old detainee Aliagha Babayev’s cousin Ali Babayev told APA that they are complaining of poor detention conditions. He said he had phone conversation with his relatives through mediation of the Ministry of Foreign Affairs in December last year. “We have repeatedly appealed to the Libyan Embassy. However, the embassy said that the situation related to the public administration is not good there. We are also in constant contact with a company employee named Murad. The company says that the government of Libya demands money in exchange for the return of the ship crew. However, the company is afraid that the crew members will not be returned after money transfer. Therefore, they require a check or a bank account”, he said.

According to Ali Babayev, the name of another Azerbaijan detainee is Elmikhan Baghirov.

Last year in February, three Azerbaijanis were detained in Libya. They are captain Namig Salamov, sailor Farid Aliyev and motorist Mohlud Rashidbeyli, who were traveling to Turkey to work.

They were not heard from since February 21, when they were on board “Kalkanlar 1” ship off the Libyan coast. Farid Aliyev’s brother Zaur Aliyev told APA that it was not until October 2016 that they finally heard from his brother.

“He called us up himself and told us that a group of Azerbaijanis had been taken hostage along with others by a rebel group called ‘Dawlah Al-Islamiyyah’ operating in Libya. Afterwards, when government forces set the hostages—including Azerbaijani ones—free in Misurata. They’re currently in prison in Misurata,” he said.

Zaur Aliyev said he last talked to his brother five or six days ago.

“We’re being told they’re going to be released but it has not happened for months. They’re not being held in good conditions therein. We, as well as the families of the other detainees, are desperately worried. The dead body has already arrived of one of them. We’re afraid that those of ours might end up like him. If it has been possible to bring back the deceased one’s body, it should also be possible to bring back those still alive,” he said.