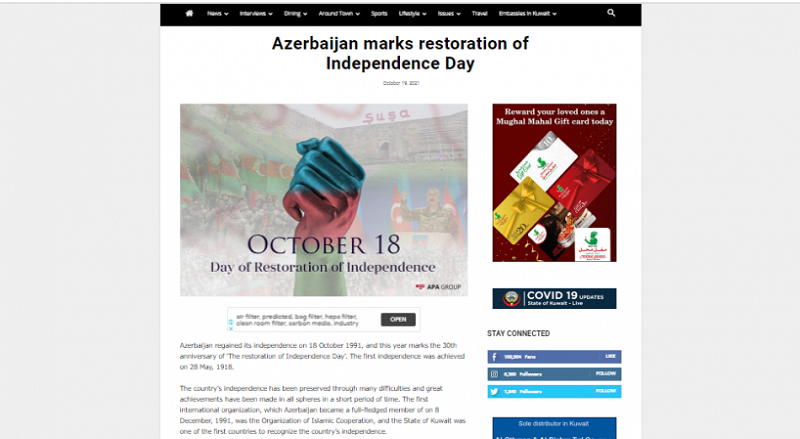 “Azerbaijan regained its independence on 18 October 1991, and this year marks the 30th anniversary of ‘The restoration of Independence Day’. The first independence was achieved on 28 May, 1918.

The country’s independence has been preserved through many difficulties and great achievements have been made in all spheres in a short period of time. The first international organization, which Azerbaijan became a full-fledged member of on 8 December, 1991, was the Organization of Islamic Cooperation, and the State of Kuwait was one of the first countries to recognize the country’s independence.

Thus, at present, Azerbaijan regularly lends a helping hand to countries facing crisis situations. Such assistance has been provided since 2011 to many countries in Asia, Europe, Africa and Latin America. In addition, the partnership with international financial and donor institutions are being developed, and joint projects are being implemented with the United Nations Development Program, the Organization of Islamic Cooperation, the Islamic Development Bank and other international financial and donor institutions.

Technical assistance projects have also been developed, and support has been provided for education and training programs. According to the relevant decree of President Ilham Aliyev, in the framework of the chairmanship of the Non-Aligned Movement in 2019-2022, every year 40 students are studying in Azerbaijan from member countries of this influential international organization, along with their peers from OIC countries, with full scholarships since 2018.

Azerbaijan has provided humanitarian and financial assistance to more than 30 countries, including the Non-Aligned Movement (NAM), in the fight against the COVID-19 pandemic. Azerbaijan has made a voluntary financial contribution of $10 million to the World Health Organization, half of which were intended for the NAM member states.

The oil strategy, founded by the late national leader of Azerbaijan people Heydar Aliyev laid the foundation for Azerbaijan’s future development, and today Azerbaijan’s economy accounts for 70 percent of the GDP of the South Caucasus. According to all economic indicators, Azerbaijan is a leader in the region.

The hydrocarbon resources produced in Azerbaijan, which has become a major energy exporter, are delivered to European and world markets through oil and gas pipelines, terminals and railways. The integration of Azerbaijan into the international community, which has become an active participant and centre of economic processes and major energy projects in the world, is accelerating every year, and the country makes important contributions to Europe’s energy security.

The largest transnational Baku-Tbilisi-Jeyhan oil, Baku-Tbilisi-Erzurum gas and Baku-Tbilisi-Kars railway projects in the region have formed a strategic cooperation between Azerbaijan,-Georgia and Turkey. These projects, on the one side, strengthen Azerbaijan’s position in the world as an important economic and energy partner, and on the other side, ensure the large revenues from gas export in the future.

Azerbaijan has chaired the UN Security Council, the Committee of Ministers of the Council of Europe, the Non-Aligned Movement and a number of respected international organizations. One of the special features of this year’s holiday is that the country will celebrate the 30th anniversary of the restoration of our independence together with the liberation of Karabakh territories from occupation.

Karabakh has been declared a ‘green zone’ by President Ilham Aliyev, as the area will use natural energy from its rich solar, wind and water resources.

In addition, several ‘smart village’ and ‘smart city’ projects based on advanced technologies will be implemented in the liberated lands. This will cause less damage to the environment, create a developed transport infrastructure, better ensure the safety of the population, provide uninterrupted utilities, apply modern technological innovations, and create ample opportunities for local and foreign investment.

Early this month, President Aliyev laid the foundation of the ‘Araz Valley Economic Zone’ industrial park in the newly created East Zangazur Economic region. In this regard, President Ilham Aliyev said: “We will turn Karabakh into a paradise. All instructions have already been given. All work is being done, it will be done in a planned way, and we will live in these lands forever.”