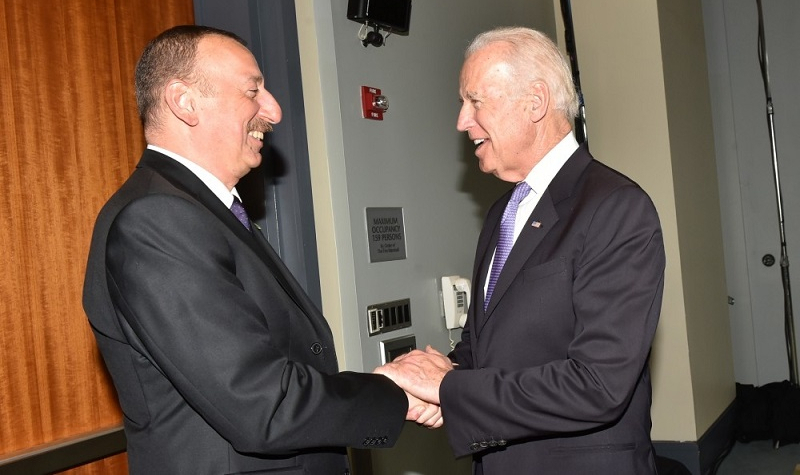 Azerbaijan’s President Ilham Aliyev sent a letter to US President Joe Biden, thanking him for his congratulatory letter and kind words on the occasion of Novruz, News.Az reports.

“As you mentioned, this year we celebrate a significant anniversary – the 30th anniversary of the establishment of diplomatic relations between the Republic of Azerbaijan and the United States of America. I congratulate you on this occasion and convey my sincerest wishes to the friendly people of America,” the head of state said in his letter.

“I am pleased to note that over the past 30 years, successful bilateral relations have been established between our countries. During this period, our multifaceted fruitful activity has been accompanied by mutual investment and the active involvement of hundreds of companies representing your country in the economic life of Azerbaijan.”

The joint efforts of Azerbaijan and the United States to address important issues on a multilateral basis, as well as bilaterally, are truly commendable, President Aliyev noted. “In this regard, energy security, international security and the fight against terrorism are among the leading areas that characterize our partnership. We appreciate the consistent support provided by the United States in the development of rich energy resources in the Azerbaijani sector of the Caspian Sea and the implementation of large-scale transnational energy projects, which are of great importance for ensuring global energy security.”

The head of state stressed that along with the United States, Azerbaijan has proved to be a reliable partner in the fight against international terrorism and its various manifestations. “Our country's close cooperation with the United States within the framework of NATO's Resolute Support Mission in Afghanistan is a clear demonstration of our contribution to international peace and security,” he added.

President Aliyev noted that today, the Republic of Azerbaijan is a state pursuing an independent policy based on the will and interests of its people.

“The liberation of Azerbaijan's historical lands put an end to almost 30 years of Armenia's military aggression against Azerbaijan, as our country implemented the relevant UN Security Council resolutions that had remained on paper for almost 30 years. As a supporter of peace, we are ready to start negotiations on a peace agreement with Armenia on the basis of fundamental principles of international law, such as the territorial integrity, sovereignty and inviolability of the internationally recognized borders of our country. We do hope that the United States will support Azerbaijan's peace agenda based on a vision for the future,” he said.

President Aliyev said post-conflict restoration and reconstruction work is currently underway in Azerbaijan’s liberated lands, noting that Azerbaijan would be pleased to see US companies’ involvement in this process.

“I believe that as friends and partners, we will continue to make joint efforts to further develop our cooperation in all areas, which has significant potential for the benefit of our countries and the well-being of our peoples,” he said.

“Taking this opportunity, I wish you the best of health, success in your endeavors, and the friendly people of America lasting peace and prosperity,” the Azerbaijani leader added.