We are fighting alone, on our own – Azerbaijani President 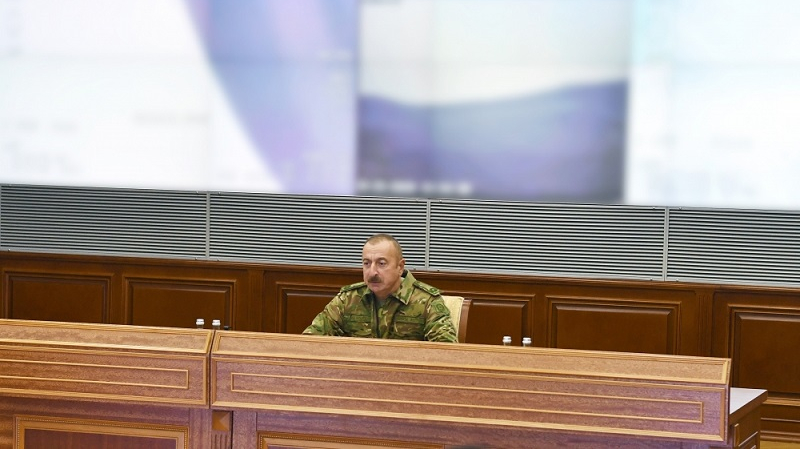 Azerbaijan is fighting alone, on its own, President of the Republic of Azerbaijan, victorious Commander-in-Chief Ilham Aliyev said during an operational meeting held at the Central Command Post of the Ministry of Defense with the participation of the leadership of the Defense Ministry and the commanders of the joint corps located in the frontline zone.

The head of state noted that the ceasefire cannot be unconditional.

“They will deceive us for another 27 years, for another 30 years. Delegations will be coming here for another 30 years and negotiations will be held. We are fed up and the patience of the Azerbaijani people is exhausted. Twenty-eight years ago, the Minsk Group was established. They have been deceiving us for 28 years. For 28 years, they have been promising to us, asking us to wait, saying that they will put pressure on Armenia, that they will do this and that. It was all a lie. Everyone sees it now. I have always told my people the truth. I have always said things the way they are. And I am saying that today. I must say that Armenia is being armed,” he said.

President Aliyev stressed that the most modern weapons are being sent to Armenia every day.

“We have a list of these weapons. We have all the information about the flights, when, where and from which city they departed, when they arrived in Yerevan and what they carried. During the current fighting, about 300 Armenian tanks have been either destroyed or taken as military booty. Where does all this money come from? It is a poor country with no money and no opportunities. They got it for free. Six S-300 anti-aircraft missile systems have been destroyed. Their price is known. Where does this come from? TOR, OSA anti-aircraft missile systems, unmanned aerial vehicles, aircraft which have already been destroyed by Azerbaijan. Where did Tochka-U and SCUD come from? It is given to them for free. We cannot remain silent about it. Everyone should know this. We are fighting alone, on our own!” the head of state added.