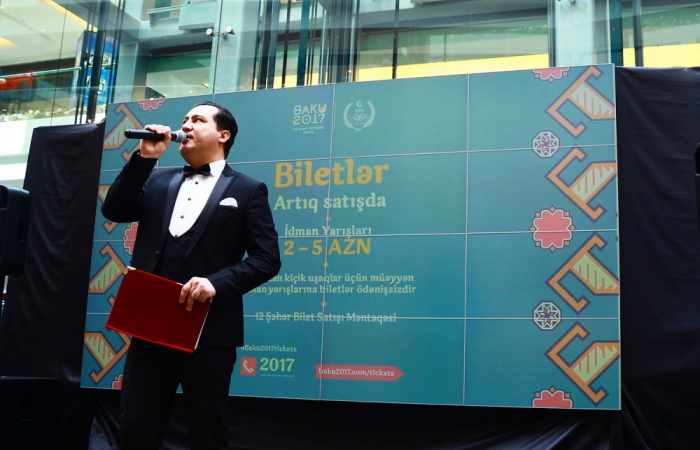 Tickets for the Baku 2017 Islamic Solidarity Games, which takes place between 12-22 May, go on sale and are available online and at city centre outlets across Baku.

In order to encourage as many families and young people to come and enjoy being part of the Games tickets will be priced from 2 AZN, according to AzVision.

In total, more than 500,000 tickets will go on sale giving people the chance to watch 20 sports and also attend the Opening and Closing ceremonies, which will be held at the Baku Olympic Stadium.

Spectators and sport fans will be able to buy tickets online through official baku2017 website and from 12 City Ticket Outlets around Baku. Three main ticket sales points will be located inside 3 shopping malls, Park Bulvar, Ganjlik Mall and 28 Mall. Additionally, Venue Ticket Box offices will be operating at 16 venues during the Games.

Tickets for all 190 sport sessions will cost between AZN 2-5. Under 16s can get free access to watch sport sessions at 13 of the Baku 2017 venues, as long as they get a complimentary ticket in advance. Children between the ages of 2 and 16 will be able to purchase a special Child ticket to get access to events at the Heydar Aliyev Arena, National Gymnastic Arena and Tofig Bahramov Stadium.

Once again the Baku Olympic Stadium will play host to the Opening and Closing Ceremonies. Tickets to these events, which are always popular, are priced between AZN 20-200 for Opening Ceremony and AZN 10-100 for Closing Ceremony. For detailed Baku 2017 ticket price list and the latest news, please visit the tickets section on the official website of Baku 2017 Islamic Solidarity Games.

The Baku 2017 Islamic Solidarity Games is an exciting multi-sport event uniting the Islamic world, which will take place in Baku, Azerbaijan from 12 – 22 May 2017.