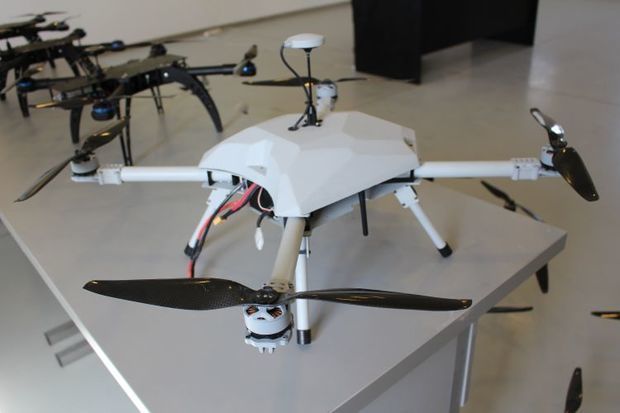 “A young and experienced team staff has been brought together in a short time at ANAS HTP. The manufacture of UAVs is going on pretty fast and is almost finished. They have been tested successfully,” he said.

According to Babayev, there are 6 new types of UAV being manufactured in the ANAS High Technologies Park.

"Of them, five types are multi-rotors and the remaining one is a type of aircraft. These UAVs are intended to be used in several areas—in agricultural irrigation and pharmaceuticals, environmental monitoring, forestation, aerial photography and mapping, as well as three-dimensional maps,” he said.

The director pointed out that UAVs are used in almost all fields in the modern era, adding that the UAVs being manufactured at the ANAS HTP are primarily of civil and military nature.

"Examples include ambulance, postal services, search and rescue services of the Emergency Situations Ministry, aerial photography, etc. Generally, it is possible to modify UAVs and integrate appropriate equipment into the system in accord with consumer demand,” he added.

Speaking about the parameters of UAVs, Babayev said that parameters very depending on the model. “The estimated parameters are as follows: Flight time is up to 30 minutes, carrying capacity ranges from 0-5 kg, and the speed limit is up to 35 km/h,” he said.

The UAVs have not yet been named, added Babayev.

Noting that they have already received orders from several government agencies, Babayev said that negotiations were held with SOCAR, and UAVs will be produced in accordance with their requirements.

“Currently, test flights are being carried out jointly with SOCAR. A presentation will be held in the near future,” he said.

The director general also talked about the expected innovations in the techno-park.

“Though short time passed since the establishment of the ANAS HTP, we have succeeded in several areas with 7 local residents operating in the techno-park. We began to implement joint projects with several foreign companies and local government agencies. The ANAS HTP closely cooperates with the world’s leading techno-parks and brings together science and business in Azerbaijan,” added Babayev.